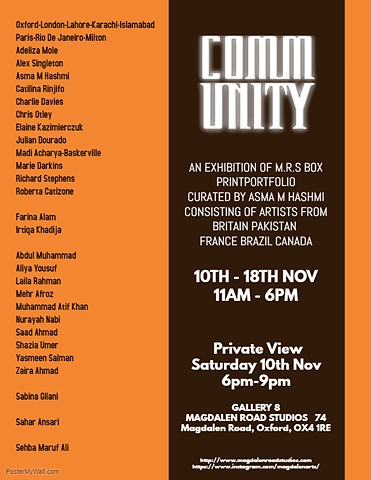 Community is made both complex and elusive by many aspects of current life and culture. Internet platforms connect yet segregate us. Migration invites exchange yet alienation. One’s place among others is increasingly removed from physical location. Urban density increases both proximity and anonymity. CommUnity print exchange proposes to simplify community. What is our obvious commonality? How immediately and tangibly can it be felt? These artists faced these questions in various ways through their responses to this event. The very nature of this exchange creates a gathering of individuals from a variety of distant locations into a community through common art practices. The work culminates both in a public viewing of the show as a whole in a single gallery, and in the concept of box portfolio - the lasting distribution of the full print collection to each of the participants. The value of this collection is unique. Each edition contains hand signed and numbered prints, one of which is the owner’s own work. The artists are literally together within it. Where will each collection live within the life, work, and homes of these printmakers? What correspondences may continue between artists sharing the same collections? One imagines spending years visiting and revisiting, say, a particularly cherished print, with the added depth of knowing that same artist holds the collection as well, including one’s own piece. Many of these printmakers were previously unfamiliar to each other, and are now present in each other’s work and histories in a most tangible way. Artist and curator Asma M Hashmi was careful to honour the spontaneity and honesty of each participant’s response to the theme of Community. Confident that the process itself would inevitably reflect on community, given the shared medium and destination for showing, Hashmi simply and generously posed the theme and encouraged open-ended response. She fostered space for the potential for variety and commonality, and perhaps coincidence, among diverse artists practicing similar media. Questions of community are complex. Even at the very local level of one individual’s creative response to a medium, there is a reckoning with others - fellow artists past or present who have inspired or challenged, friends or family members navigating around support and solitude, professional associates, imagined or real viewers … An artist may accept or even insist upon a certain distance from others for the sake of their intimate engagement with a medium. The art itself simply demands this often enough. Yet there are deep and widespread personal connections stirred by and around the results of this independent work. By gathering around this print collection, as the artists themselves gathered around the theme, and as the physical copies of the collection are gathered ultimately, we embrace the potential to distinguish ourselves, via independent community, from a larger global political picture of divisiveness and separation. The potential of individuals and spontaneous community to reflect cooperation, support, and commonality is an important counter here. The exhibition site of Oxford, with its strong South Asian population, offers a reflection of migration and exchange between England and South Asia, each area with its own connections to Canada and France, also represented. Known challenges of migration and exchange on the large scale, particularly poignant in this moment of Brexit on one side of the Atlantic and Trump on the other, are answered through the organic potential of the community scale when we seek to engage it. The artists in CommUnity have common practices, each expressed uniquely. They have gathered their works without necessarily knowing each other, into something we can all know, and through it, know each other.