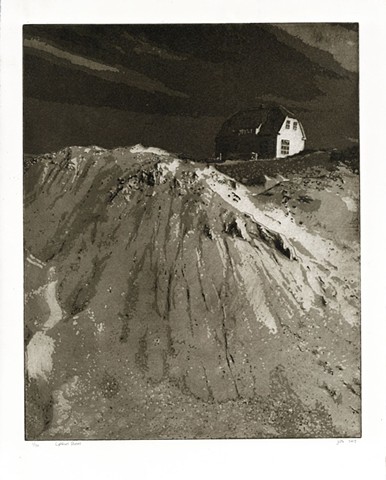 Chris Otley grew up on the Northumberland coast, before studying History of Art at the Courtauld Institute (BA 2005, MA 2006). He produces crisp and meticulous highly detailed works on paper in graphite, often on a large scale, with a focus on natural history. He has an ongoing interest in 17th and 18th century travel journals and anatomical draughtsmanship (in particular the work of George Stubbs). He is a studio member of Magdalen Road Studios Oxford, and an associate at the Oxford Printmakers' Co-Operative. He is also Head of Art at Magdalen College School.

My current focus is on coastlines, and invasive species found in nature. Both these subjects have become politically charged in recent times, with ongoing debate about migrancy. Refugees have often been labelled in negative biological terms, with tabloids referring to 'swarms' and 'plagues'. I have focused for some time now on images of beached jellyfish, drawing a quiet response. For this etching with aquatint, I travelled to Denmark to see the beaches there, the desolate dunes littered with abandoned Nazi-era bunkers, right alongside vernacular Danish summer-houses. I see the beach as a strange historical hinterland as a result, especially when embedded in a culture which prefers to root itself in its Viking heritage. Beaches and coastlines can be seen as at the heart of ideas of nationality and community, whether they welcome or guard against incomers.